One day after the Season 1 finale of Reservation Dogs launched on FX on Hulu, the dramady opened up its writers room for Season 2  – and they’re going large.

Almost doubling in size, the all-Indigenous staffed room will also see star Devery Jacobs stepping behind the camera too for the next season.

“She’s made films and it’s something that she’s always wanted,” Reservation Dogs creator Sterlin Harjo told Deadline about the actress, who portrays Elora Danan on the acclaimed dramedy. “I found myself on set, sometimes we would lean on her, like there would be something that Elora Danan was going through and we would go to Devery for the answer and she would give us this very thoughtful answer,” the showrunner said.

“Sometimes she would even bring the issue up to us, like you know, something that she felt like Elora wouldn’t do or needed to do, and it was just a really natural fit to bring her into the room.

Alongside Jacobs, Harjo himself will be back along with Season 1 scribes Bobby Wilson, Migizi Pensoneau (who penned the “Satvrday’ Season 1 finale), Tazbah Chavez and Tommy Pico. But along with Harjo’s stated vision to “expand” for the show’s second season, the room will add an even wider range of voices.

“Blackhorse Lowe who was a director on the show, he’s a writer on the show this season,” Harjo said. “And you know, Dallas Goldtooth who plays Spirit is going to be in the writers room now with Ryan Redcorn, and comedian Chad Charlie. And we have Erica Tremblay who’s a great filmmaker as well, she’s coming into the room.”

“So, it’s very exciting to get all of them, to get this crew. It’s a bunch of friends and you know, as this show sort of expands and we move further into wherever we go, we have some big ideas. I’m just excited to get everyone in the room and get cracking on it.”

Season 2 of Reservation Dogs is expected to launch on FX on Hulu in the second half of 2022.

In the meantime, check out full bios for all of the series’ Season 2 writers below:

His most recent narrative feature, the thriller Mekko, premiered at the 2015 Los Angeles Film Festival and had its international premiere at the Toronto International Film Festival. Starring Rod Rondeaux and Zahn McClarnon, Mekko follows a homeless parolee in Tulsa as he confronts darkness in his new surroundings and wrestles with his past.

His first feature film, Four Sheets to the Wind, was nominated for the Grand Jury Prize at the Sundance Film Festival in 2007 and won a Special Jury Prize for lead actress Tamara Podemski. Harjo also juried the Sundance short film competition in 2010.

On the television side, Harjo is in development with several series, including Rez Ball with Sydney Freeland for Netflix and Yellow Bird with Erica Tremblay for Paramount+.

Harjo is a founding member of The 1491s, a popular sketch comedy troupe. At the 2019 Oregon Shakespeare Festival, the sketch comedy group premiered Between Two Knees, an intergenerational comedic love story/musical set against the backdrop of true events in Native history. Between Two Knees was co-commissioned by the Oregon Shakespeare Festival and New Native Theatre. The play was a bestseller and recorded an average of five walkouts at each intermission.

Harjo currently lives in Tulsa, Oklahoma, where he spends his time making content and raising his amazing children.

Migizi Pensoneau (Ponca/Ojibwe) is a writer, producer and founding member of the Native American sketch comedy troupe The 1491s, with whom he co-wrote the hit play Between Two Knees, recently confirmed for production at Yale Repertory Theatre for the spring of 2022. Pensoneau most recently wrote on Barkskins, Two Sentence Horror Stories and wrote and co-produced for season one of Reservation Dogs. He frequently publishes pieces exploring the intersection of Native Americans and popular culture, and his cats are better than your cats.

Tazbah Rose Chavez is a performance poet turned director and television writer. Raised in Payahuunadu, Chavez is a citizen of the Bishop Paiute Tribe and comes from the Nüümü, Diné and San Carlos Apache people.

She is a co-executive producer and episodic director on FX’s Reservation Dogs, co-producer on NBCUniversal’s Rutherford Falls and was a staff writer and consultant for SyFy’s Resident Alien.

She has performed her poetry in acclaimed spaces such as the Smithsonian – National Museum of the American Indian, Meow Wolf and the Grand Performances Stage to name a few. She holds a degree in American Indian Studies from UCLA and currently serves as the co-chair of the Native American and Indigenous Writer’s Committee at the Writer’s Guild of America.

Bobby “Dues” Wilson is a Sisseton-Wahpeton Dakota actor, writer, poet, visual artist, and comedian, and a founding member of Indigenous Sketch Comedy group The 1491s. Bobby has appeared as an actor on The Daily Show and What We Do in the Shadows (FX). He has been a writer and actor on Rutherford Falls (Peacock / UniTV) and Reservation Dogs (FX). Bobby is represented by Debbie Deuble-Hill and Jack Leighton at APA, Tom Carter at Artillery Creative, and Matt Wallerstein at Hirsch Wallerstein.

Tommy Pico is a poet, podcaster, and TV writer. He’s authored four collections of poetry, co-hosts the podcasts Food 4 Thot and Scream, Queen! and writes for the shows Reservation Dogs and Resident Alien. Originally from the Viejas reservation of the Kumeyaay nation, he now lives and dates in Los Angeles.

Erica Tremblay is an award-winning writer and director from the Seneca-Cayuga Nation. Her short film Little Chief premiered at the 2020 Sundance Film Festival. Tremblay is a current Sundance Screenwriters and Directors Lab fellow and in 2021, she was awarded the Walter Bernstein Screenwriting Fellowship, the Maja Kristin Directing Fellowship and the SFFILM Rainin Grant. She was the Executive Story Editor on Dark Winds, an upcoming AMC series produced by George R.R. Martin and Robert Redford. Up next, together with Sterlin Harjo, she will be co-writing and Executive Producing a series adaptation of the Pulitzer Prize finalist, Yellow Bird for Paramount+. Tremblay lives on Cayuga Lake in upstate New York, where she is studying her Indigenous language.

Devery Jacobs was born in Kahnawà:ke Mohawk territory and is an award-winning actor and filmmaker. Her breakout leading role in Rhymes for Young Ghouls (2013), landed her a nomination for a Canadian Screen Award for Best Performance by an Actress in a Leading Role. Since then, Jacobs is mainly known for her performances in Netflix’s The Order (2019-20) CTV’s Cardinal (2018) and Amazon Prime Video/STARZ’s American Gods (2019-20). Most recently, Jacobs is one of the leading roles in FX’s new smash-hit series Reservation Dogs (2021).

Alongside acting, Jacobs is also an accomplished filmmaker. Her short film Rae (2017) was an official selection of the 2018 Palm Springs Shortfest, and won Best Youth Work at the 2017 imagineNATIVE Film Festival. Jacobs was also a participant of the 2020 imagineNATIVE Indigenous Screenwriters Intensive where she completed her feature film script, High Steel. Jacobs’ debut feature film as a co-writer, This Place is set to release in 2022.

Jacobs was named one of Canada’s Rising Breakout Stars by the Hollywood Reporter and was honored by Telefilm Canada at the 2017 Birks Diamond Tribute, celebrating women in film. Jacobs was also a TIFF Rising Star at the 2018 Toronto International Film Festival.

Dallas Goldtooth is an Isanti Dakota and Dine actor, comedian, stage performer, public speaker and citizen of the Oceti Sakowin Oyate. He is a film producer, playwright and published poet. He co-founded The 1491s, an all-Indigenous social media group that uses comedy and satire as means of critical social dialogue. He is also a Dakota language activist, cultural teacher, dedicated father and loving husband.

Blackhorse Lowe is a filmmaker from the Navajo Nation. His current feature film Fukry screened at the imagineNATIVE Film and Media Arts Festival and many other festivals internationally. Chasing the Light, his previous feature, won Best Cinematography at the Terres en Vues/Land InSights First Peoples Festival in Montreal in 2016.

A recipient of a Renew Media Award, Lowe is an alumnus of the Sundance Institute’s NativeLab, Producers Lab and Screenwriters Lab. Lowe also curates an ongoing film series in Albuquerque, New Mexico called CineDOOM that showcases both edgy and genre-driven Indigenous films. Currently, he is a 2019-2021 Tulsa Artist Fellow recipient, writing a variety of genre features and programming film screenings in the Tulsa area.

Chad Charlie is an Afro-Indigenous filmmaker from Ahousaht First Nation. Beginning his career in 2008 as a stand-up comedian and spoken word artist, he now extends the same passion for poetry and humor in his writing for TV and film.

Chad has directed several short films. The most recent of which, Firecracker Bullets, will be set for 2022 festival season.

Ryan RedCorn (Osage) was born in Tahlequah, Oklahoma into a family of preachers, politicians and salesmen, which are the all the same occupation. He is the ilonpa of Raymond and Elizabeth RedCorn, and the object of jealousy from his three younger brothers Jon, Alex and Studebaker, who between them have three masters degrees and two Phd’s. Ryan, however, took 6 and half years to get an art degree in visual communications from the University of Kansas.

To the surprise of many, Ryan has been able to translate his education, his inlonpa entitlement, and his family lineage into something some people think is valuable. Sometimes people laugh at him. He co-founded the Indigenous comedy troupe, the 1491s, and started a full services ad agency in the middle of nowhwere Pawhuska, Oklahoma called Buffalo Nickel Creative. But he’s ok with all of that. He recently woke one morning and realized he was married and had three daughters. He remarked, “I live a crazy life” and promptly enrolled in an MFA in screenwriting program to test his capacity for stress. He graduated in the Spring of 2020 and is presently alive and vaccinated. 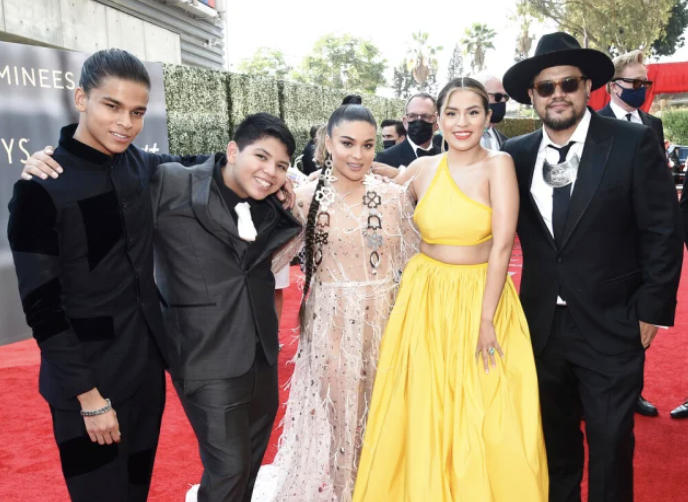